With England under Covid-19 lockdown it seemed, for a while at least, that the 2020 crop circle season may never get underway. Thankfully, after a bit of a wait, some circles did slowly begin to appear. Along with the formations came the croppies including researchers, alien scat collectors, old school enthusiasts and self-proclaimed artists after nothing but fame.

In a now annual roundup of both the best and worst people to have been found in the fields, let’s see who is Top of the Croppies 2020.

Since writing this piece, The Croppie has been made aware that the first name in the list actually thought they’d finished top, despite what was written under the final name. Sorry captain, yer wrong. You were listed first because you were the rank outsider… There’s nothing like watching a man get a new tattoo, change his identity and get into the odd world of crop circles. Enzo is the source of countless factoids that have entertained the masses on Circle Chasers throughout 2020. For example, he’s photographed previously unknown planets; Dan from Team Clandestine is an expert circle maker; Jupiter and Saturn will be passing each other at a distance of less than one quarter of the width of Earth’s moon. Sounds legit. Totally bonkers but good fun all the same.

As of this article being published Enzo has published his own Ten Commandments. Don’t love others before you love yourself, but hold hands more. Hmmm.

Since 2019’s Top of the Croppies, sleepless social media addict Jack Jane has apparently been outed as a Canadian circles researcher called Joanna Emery. The smoking gun proved to be no more than an IP address posted online that resolved in the Toronto area. There was no additional context —- a source would be helpful, together with some proof that it was Jack Jane leaving her digital fingerprint behind —- meaning this big reveal was and is no more than idle gossip. More convincing was JJ’s ability to be completely fooled by the online sock puppetry antics of Team Clandestine. She resolutely refused to believe that Facebook users Cipro Clerc and Felicity Johnson could be connected to Team Half Wit. Meanwhile, she continued to flout the paranormal authenticity of pathetically lame Dutch circle maker, fake medium and piss poor spirit photographer Robert van den Broeke. Now she’s suggesting Matthew Williams is a shining light of truth. Right…

Back in September, circle chaser Josh Kerson chose to stick his head above the parapet with reference to one particular crop formation from the 2017 season. Not only had aliens made it, Kerson had photographic ‘proof’ one of their kin had stopped to squat down for a shit in nearby woodland. The Croppie hopes Mr Alien really did use something to wipe his posterior. Furthermore, The Croppie hopes Josh is feeling better. Artist and naughty novelist Guy Shepherd is the modern representation of an old style, middle class croppie from 1990. He glides into circles on a warm morning, takes off his shoes and feels the energy in his toes. Girls giggle, women remove clothes, men discover a hidden side to their sexuality and Guy snaps photos he later prices up at £250 a pop. Good for him, no matter what the critics say. Already a legend in his own right, Guy has a new book on the horizon detailing the art and etiquette of holding a picnic inside a crop circle. What a weird year it has been for Team Clandestine. The WORLD’S BEST CIRCLE MAKING ARTIST Dene Hine started the year with a manifesto outlining how 2020 was going to be. He’d no longer work with any publication that would suggest crop circles were some kind of mystery. We waited to see what this principled approach would deliver in the real world. After all, where there’s publicity to be had, the deluded mark maker’s gonna be trying to get to get a slice of the pie. It looked as if we could see some interesting moves when Hine took on a new sidekick with legitimately hot designs — albeit they were recklessly slapped across Facebook and YouTube. Sadly, none of the promise became reality and it was just another year of attention seeking antics for the dismal ten-watters from the south west. Watch the Clandies’ agent go scrabbling around on the Crop Circle Connector run Circle Chasers group, desperately attempting to defend his ‘client’ after yet another PR disaster. The Croppie suggests said agent shovels so much shit he’d be better off seeking employment at a racing stables.

Dene has been around long enough to know that it’s something current and relevant that can get a crop circle noticed these days. So he thought there would be no better plan than to join the national obsession with paying tribute to the NHS and key workers such as those at The Croppie. Rather than lovingly craft a delicate, well surveyed formation, we had a rehashed piece of off-centre wonk crowned by a four year old’s drawing of a pawn from a chess board. Once it became clear the national media had no interest in this abhorrent mess —- they were way more interested in the ‘virus’ formation at Potterne —- the bird-brained Clandies continued to mercilessly spam the hell out of their circle on social media and in local newspapers. With the latter, they even lied about the circle’s location. The Clandies are gonna keep on spamming you. Anything for attention … even lying about the location of a crop circle.

Further humiliation was to come as aliens invaded the heartlands of Team Clandestine’s territory. By way of retaliation, the Clandies returned to a nearby field at Sixpenny Handley, the scene of easily their best circle in recent years. On almost exactly the same spot they shat out a jagged, wonky star, showing just how far they had sunk. It was a bit like watching the remnants of a 1960s band stagger onto the stage at your nearest Town Hall and serve up a few ragged, sloppy versions of tunes you knew. 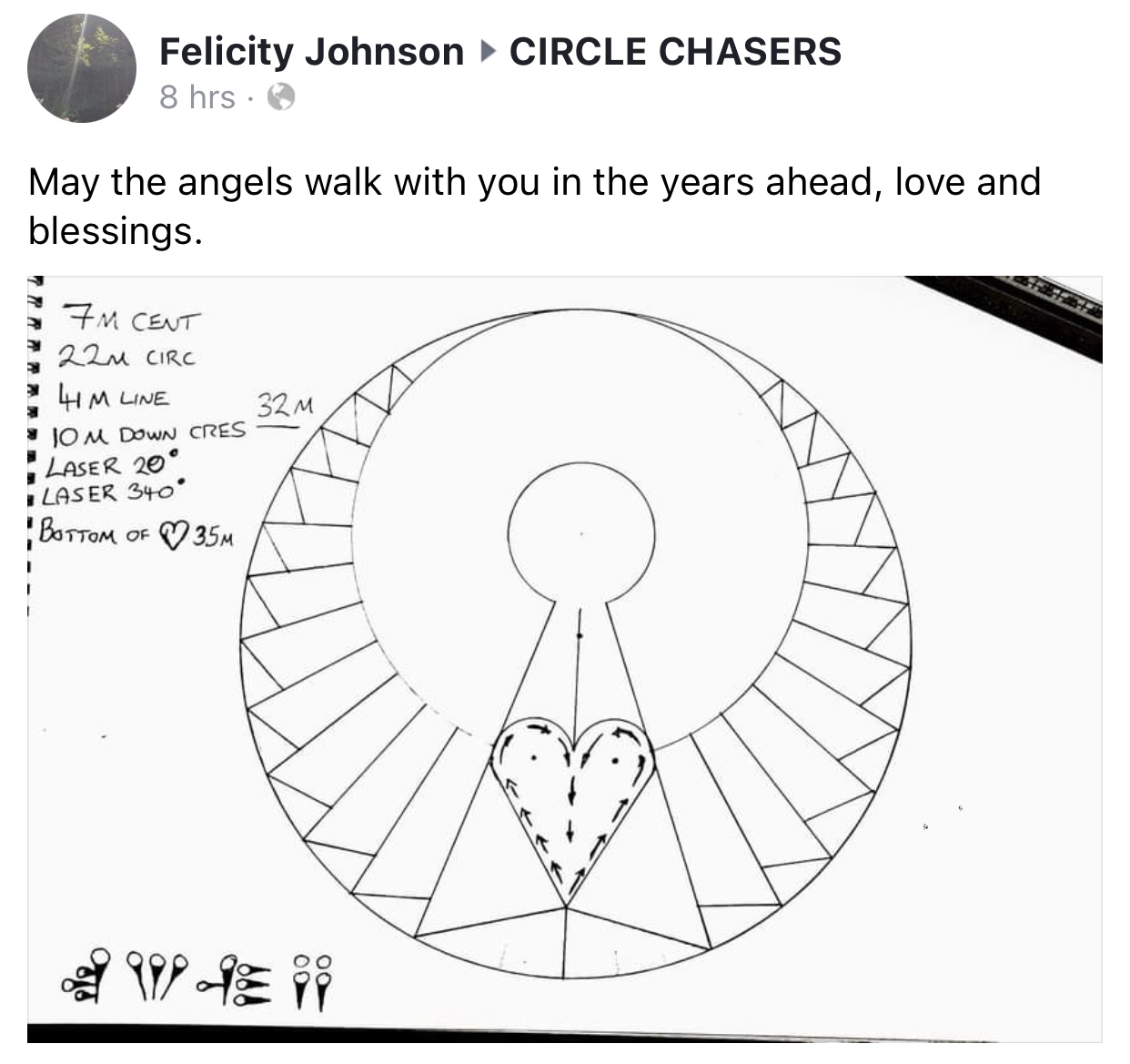 Another passing of the same old plan from Captain Insecure Ego on Christmas Day 2020.

From then on in the Clandies had nothing to offer except further social media spam and drunken, abusive rampages with a mixture of real and fake accounts. For a while Hine invited guests to an online pity party for his freshly announced rage quit retirement. Hadn’t we heard this before? Same old, same old.

The misery kept mounting up. Poor old Deney even went as far as suggesting the best ever works by one of the all time circle making greats were down to the Hine influence. Hate to say it love, but pushing a plank around a field on someone else’s job doesn’t make you Picasso. Embarrassing stuff. Then Dene published screenshots of his conversation with Mark Fussell of the Crop Circle Connector, outlining how Captain Synapse wanted some form of payment in return for providing the CCC (a website Hine has continually slammed for furthering the mystery perspective on the phenomenon) with the locations of any new circles he would make. So much for that brave new world.

It could have and should have all ended there but Dene rallied for a final dash at fame, making it onto a new YouTube mysteries show that was, in reality, no more than a lengthy, cringeworthy promo for fast food chain KFC. He couldn’t even do that properly, showing his ignorance of crop circle history and anything that isn’t in a bargain bucket. Smarting, Dene set to messaging friends of The Croppie — whilst under the influence, of course — to state his belief in himself as a ‘fine artist’, deliver threats of violence (ooh, get you!) and make weird accusations this website is run by a serial killer obsessed danger to children. Sure, simpleton.

Who knows what’s left for the Brain Cell Bunch in 2021? The Croppie doesn’t expect any retirement to stick whilst there’s White Lightning on the shelf at Lidl and ego-fulfilling attention to be sought on Facebook.

The Winner and Still Undisputed Top of the Croppies: Matthew Williams

Ahh, Matthew. 2019’s top croppie had a strange year. It started badly for Williams when he tried to exploit the national Covid-19 lockdown to settle a few scores in the croppie world. He accused photographer Nick Bull of breaching the lockdown regulations, even going so far as alerting the local constabulary through Facebook … not that they were even remotely interested. Amusingly, for such an angel, Williams later filmed himself breaching lockdown regulations on a trip to Bristol with two people from another household. From this act of gross hypocrisy, Williams went on to send a laughably childish message to one circle maker he dislikes, outlining his future plan to get them sacked from their job for an alleged drug problem. Yes, The Croppie did see Williams’s later video in which he personally admitted to a criminal record that included … wait for it … prosecutions for drugs offences. (Not that this is casting aspersions as to what Williams was putting up his nose in his very first YouTube video of 2020.) Looks like they’re still waiting for the drugs test…

Williams was having a bad time and it continued in the wake of the second circle of 2020, declaring it made by Team Shite’un, ‘a bunch of backstabbing untrustworthy pricks.’ He went on to whine about the circle’s apparently ‘shabby’ appearance being due to the makers ‘not knowing or caring that you don’t make circles in barley when the heads are drooping over as it makes for a real mess.’ He got that wrong, confusing barley with wheat.

The fun continued on one memorable June evening; we watched dumbfounded as Williams slurred his words and ate chips before heading out on an ill-fated mission to film a crop circle. He wisely chose to abort his journey, manically wittering on for the camera as he headed back home with bulging eyes. Williams later blamed his peculiar behaviour on an unlikely, simultaneous combination of dental problems, hypothermia and sunstroke. No, The Croppie doesn’t believe him either. Which man baby do you choose?

Just as it seemed likely we could be appalled by the first live streamed suicide attempt by a croppie, Williams all but disappeared from the scene. Maybe he realised crop circles were no longer good for his health. Maybe he finally understood that nobody in the croppie world laughs with him — just at him, his exploits, filthy living conditions and grimy bed headboard. Maybe he had become embarrassed by his own existence. Yet he’s never been the most self-aware person. Instead, it seems more likely Williams realised the world of urban exploration videos offered him a fresh start with a potentially larger audience. No matter, for the hilarity he’s given The Croppie in 2020, Matthew Williams remains Top of the Croppies.