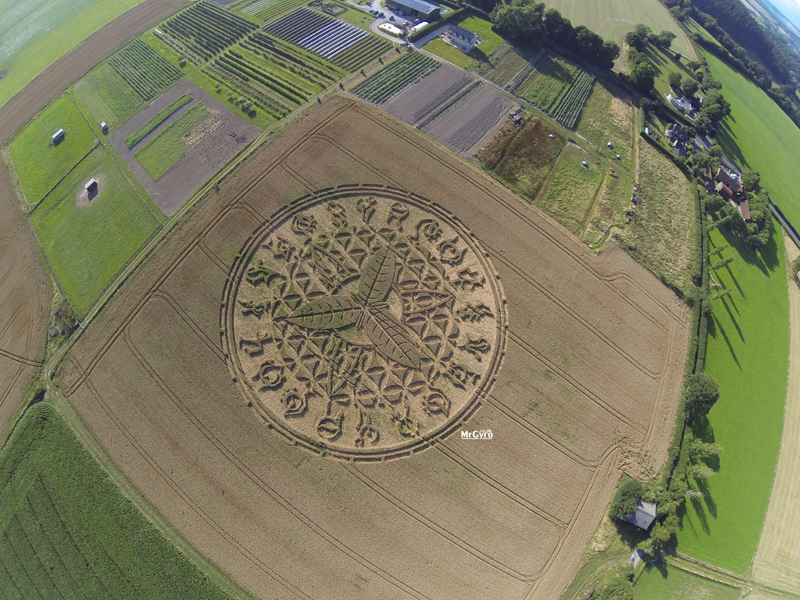 The Croppie is unashamed to admit he had suspicions relating to the recent crop circle at Ansty. So did veteran cerealogist Colin Andrews. Over at his Facebook page he revealed the results of his own investigation into the circle’s origins:

My investigation into this exceptional crop circle has been completed.

Since 1999 my focus has been on the well documented cases of ‘interaction’ involving public, researchers, farmers and human circlemakers. Because this crop circle was as impressive as I have seen, I wanted to know this time, who made it and why? I got my answers and not everybody will be pleased with the findings.

The exceptional quality is due in large part to experienced hands that made it and the three days they took to complete it. The names are known to me. They have in recent years been involved in producing designs in sand on the south coast of England **See additional comments posted above – 16th August 2016).

A three day construction period allowed them to perfect the design with the agreement of field owners.

The design was a commercial commission for Mothership Glass:

The design was a take on the company logo but was not identical to it. Note: below is their actual logo.

Note: The statement made by the field owner/shop owner, is nearly identical to the landowners statement from another commission for the computer chip company Nvidia in Salinas, California couple years ago. i.e.:

Ansty Farm Shop’s Karren Price said “her family never goes on holiday, but on returning from a five day break in Devon yesterday, they woke up this morning to discover a giant pattern in the wheat”.

This is an attempt to distance the landowner from the temporary deception period while publicity builds, hence they can say a lot without lying, after all they were allegedly not there!. It was NO surprise as stated.

Conclusions: Names of human circle-makers/land artists are known to me. They are on paid commission by Mothership Glass to construct the design, taking three days in a field owned by Ansty Farm Shop. The amount of money’s passing hands to the landowner and each crop artist and allegedly also a charity, is outside of my research objective.

I thank a number of reliable individuals who assisted me with this investigation. On this occasion the primary driver was not a mysterious interactive source but a money making effort by those involved.

Colin went on to explain how the symbols around the circle were identical to the ones appearing on the glassware company’s products. It’s a good bit of detective work by Colin: 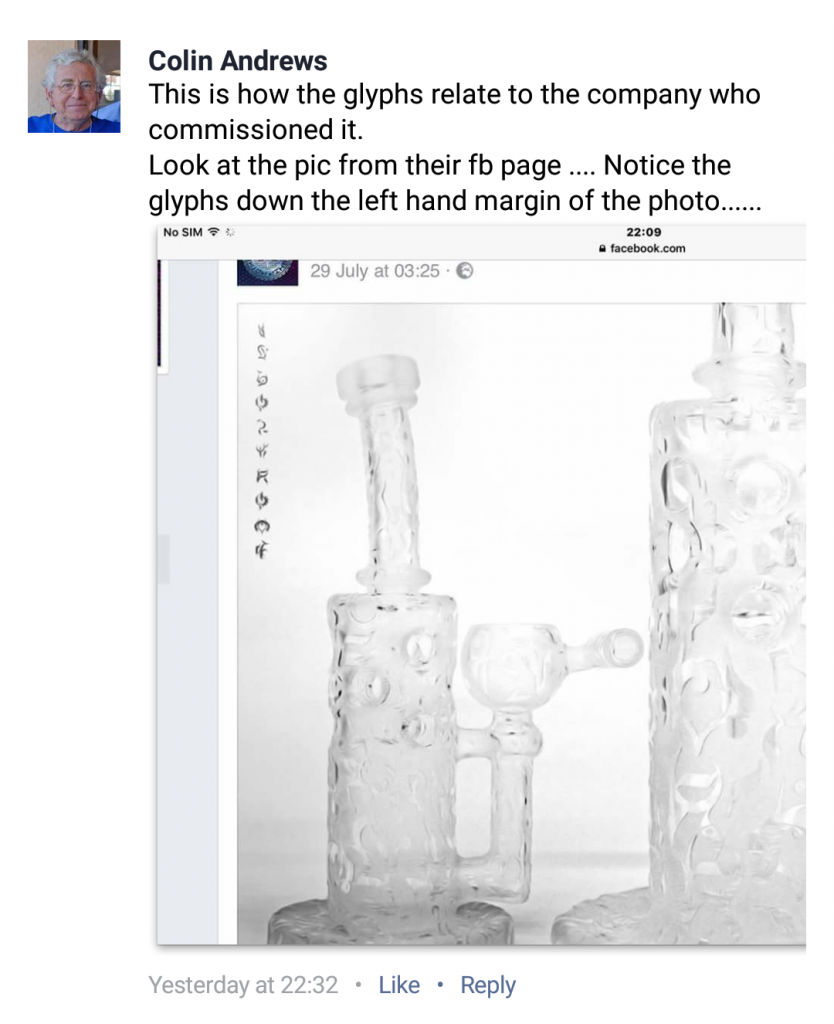 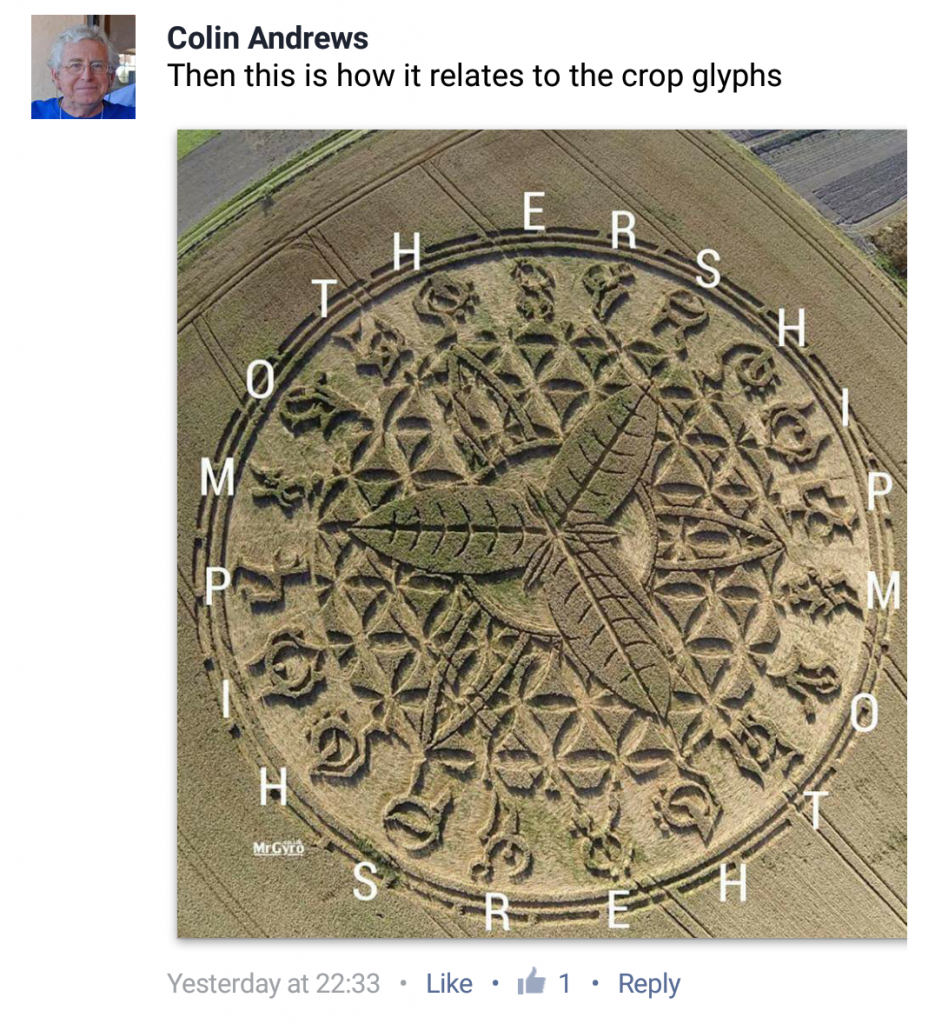 However, not everyone is happy. One of the ‘experienced hands’ who has been involved in the creation of sand art in southern England is Stuart Dike, co-owner of the Crop Circle Connector website.

Andrews has subsequently made it clear that Dike was not involved in the creation of the Ansty formation. The Croppie understands Dike’s concerns. He is co-owner of the best known, most visited crop circle website. The Crop Circle Connector has many contributors who believe in the extraterrestrial theory of the circles’ origins. However, by associating with a known circle maker to create sand art, Dike cannot expect anything except suspicion as to whether he also works the fields on summer nights. For his sake, and that of the Crop Circle Connector, isn’t it time the site’s coverage of sand circles was given a new, external home? 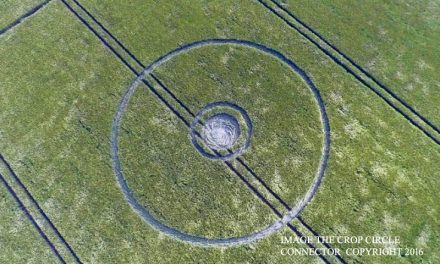 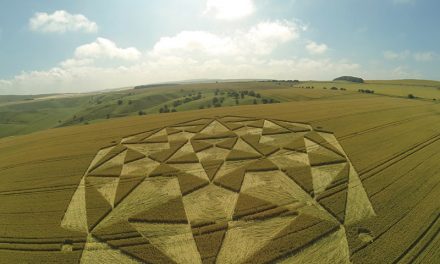 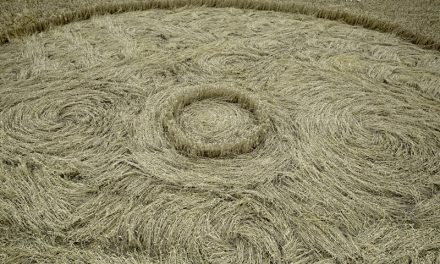 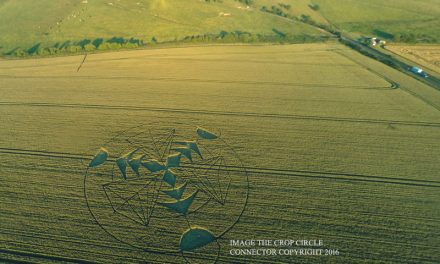