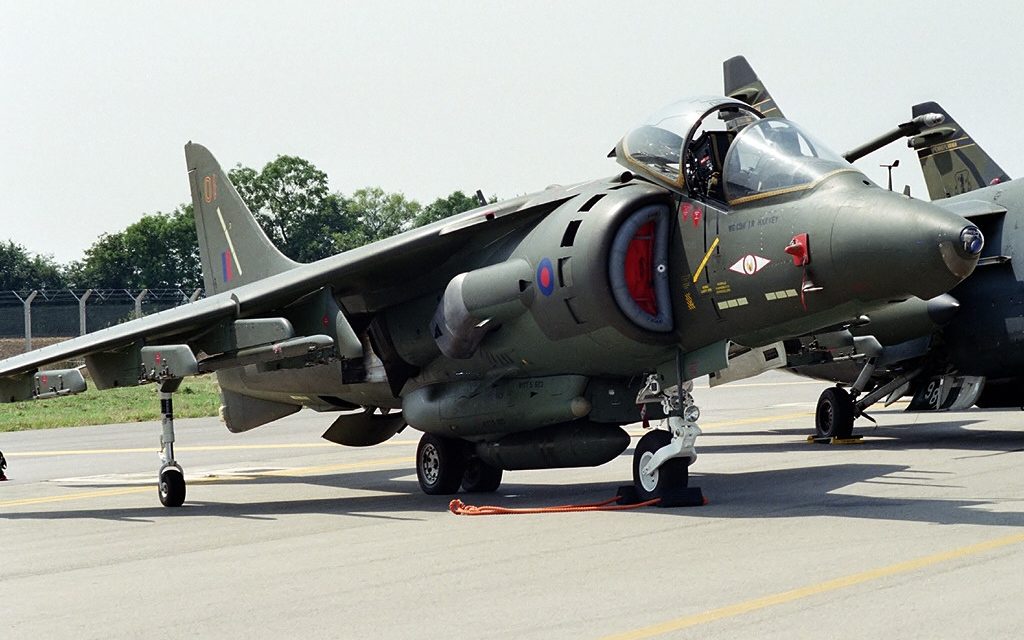 Flying Saucer Review is the gift that keeps on giving when it comes to stories from the archives. The journal’s Vol.33 No.2 (June 1988) features the sombre tale by cerealogist Colin Andrews of the crop circles and their possible link to a crashed warplane.

THE LOST HARRIER JET AND THE CORNFIELD RINGS

Complete mystery still surrounds the top-secret British Harrier GR5 jump-jet aircraft which, pilotless, flew on for over 500 miles and eventually crashed into the Atlantic Ocean off the south coast of Ireland on Thursday, October 22, 1987.

The machine had taken off from Dunsfold in Surrey on a test flight at 16.59 hrs. With pilot Humphrey Taylor Scott at the controls. Six minutes later, and without any hint of an emergency from its pilot, radio contact was suddenly lost over Wiltshire to the west.

The last radio message was a routine one, to air-traffic controllers at the top-secret Boscombe Down Air Force Base near Salisbury, Wiltshire.

Other aircraft were immediately alerted after the loss of radio contact, and an American military transporter made visual contact with the Harrier 90 miles to the west of the south-west tip of Ireland. The transporter was conveniently equipped with video cameras and filmed the Harrier in flight! The astonished American crew reported that the jet-fighter had no cockpit canopy and that its pilot was missing. hey shadowed the Harrier for 410 miles, until it finally went down 500 miles out over the Atlantic Ocean.

Despite a huge search operation, involving aircraft, shipping, life-boats and even mountain-rescue teams in South Wales, no trace of the pilot could be found. Then, on Friday, October 23, a gamekeeper, Mr Ken Pitman, came across the body of an airman lying in a field near the village of Winterbourne Stoke, near Stonehenge, in Wiltshire. A local television news programme gave this announcement as a late news item received at the end of the programme. I immediately got into my car and headed along the A303 Highway towards the village, which is just 18 miles from my home in Andover, Hampshire.

The location of Winterbourne Stoke already meant something to me, for it was in a cornfield near that village that a set of four mysterious circles of ‘swirled’, flattened indentations had been found on Saturday, August 22, only eight weeks earlier…

When I arrived at Winterbourne Stoke after hearing the news programme announcement, I at once made my way to the field where we had found these circles some weeks earlier. 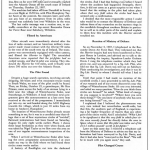 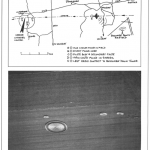 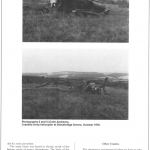 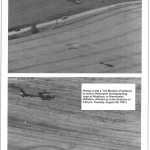 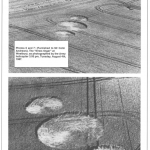 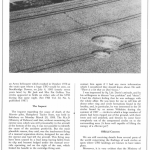 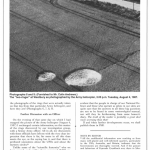 A battery of floodlights cut into the darkened countryside, and surrounded a spot in a field just opposite to the site of our set of ‘mystery circles’. A large gathering of Military Personnel could be seen moving around inside the illuminated area. A parachute lay nearby. In the darkness I could just make out two Army vehicles parked in the corner of that very field where the circles had been found. Whoever was in the vehicles was guarding an inflatable dinghy.

For some reason I cannot explain I had had a strong inner feeling that the finding of the pilot might in some way be associated with the phenomenon of the circles. And I had that feeling even before I heard where the accident had happened. Strangely, therefore, it did not come as a great surprise to me when I heard that the mishap to the pilot had taken place above that very field where the circles had been. It seemed only a confirmation.

I decided that the most responsible action I could take would be to contact the Ministry of Defence and inform them of my researches on the mystery rings in the cornfields throughout southern Britain in particular as well as in other parts of the world, and explain to them how this incident with the Harrier aircraft troubled me.

Reaction of Ministry of Defence

So on November 2, 1987, I telephoned to the Boscombe Down Air Force Base. They informed me that the Harrier inquiry had now been transferred to Prospect House in London, and advised me to talk to the man heading the inquiry, Squadron-Leader Graham Davis. I rang the telephone number which they had given me, and was answered by a Sq.-Ldr. Pike, who told me that Sq. Ldr. Davis was still out on Salisbury Plain conducting his investigations, and that it was he (Sq.-Ldr. Davis) to whom I should tell what I had to say.

Until that point I had made no mention of the cornfield circles. I now proceeded to tell Sq.-Ldr. Pike of our research and of our recent discoveries near this village of Winterbourne Stoke. He was very interested, and asked me many questions. ‘How do you think these circles are formed?’ he asked. ‘What kind of energy do you suppose is involved?’ ‘Where have you seen these things?’ ‘Do you know of anybody who has seen one being formed?’ etc., etc.

I explained that I believed the phenomenon was very rare indeed but nevertheless world-wide, but that this, the southern part of England, is experiencing a far higher frequency of reports than any other part of the entire world. And I concluded: ‘What I feel to be significant is that this very field in which four circles were recently found lies directly below the area in Space where it seems that this pilot was taken out of his £13.5 million pounds’ worth of Jet-fighter.’

Later on the same day I received a telephone call from the Ministry of Defence to advise me that my information had been conveyed to Sq.-Ldr. Davis, and that it had also been ‘conveyed to the Boss’. ‘We will be in touch with you again soon,’ they said.

Nothing further has been heard from the Ministry so far. Meanwhile I have been carrying on with my own investigations and enquiries in and around Winterbourne Stoke, and the information I have obtained confirms that the Harrier changed its course by a few degrees right over the field with the circles, and that the pilot inexplicably left his aircraft at about that point in his flight. He was not ejected by the ejector-seat with which the aircraft was fitted. That remained in the aircraft. An inflatable dinghy left the aircraft with him, as did his main parachute.

The dinghy was found in that same field which had had the circles.

This means that we now have two extremely strange and rare occurrences, both attributed to completely mysterious causes, over one and the same field within the span of a few weeks (August 22, 1987, and October 22, 1987). Can there be a connection?

The situation is not improved when we have to take into consideration other aircraft crashes in fields on which other circles have been found.

One such crash took place in a field below Pepperbox Hill, near Whiteparish, in Wiltshire, approximately thirty years ago. Two mysterious circles were found shortly afterwards, just yards from the site of the crash. And circles are still appearing in these same fields, the latest being a circle and a ring found in June 1987…

The inquest regarding the cause of death of the Harrier pilot, Humphrey Taylor Scott, was held in Salisbury on Monday March 28, 1988. The M.o.D (Ministry of Defence) said that, without examining the ejector-seat, which was still presumably in the aircraft at the bottom of the sea, it was not possible to identify the cause of the accident positively. But the most plausible reason, they said, was the inadvertent firing of a manual separation-device, designed for use after the ejector-seat had left the aircraft. This firing may have been caused by a lead lamp having fallen from its clip and become lodged under the manual override operating rod on the right of the seat, which linked the handle to the cartridge-firing unit.

Interesting Admissions by an Officer

However, when I spoke to Sq. Ldr. Graham Davis the same evening, he was surprisingly frank and told me: ‘We do not know what caused this, quite honestly
’. He went on to say: ‘I do not think the mystery circles, which I have also seen, and this, are related on this occasion.’ He admitted that the circles formations were a puzzling phenomenon, and he asked me to contact him again if I had any more information which I considered they should know about… 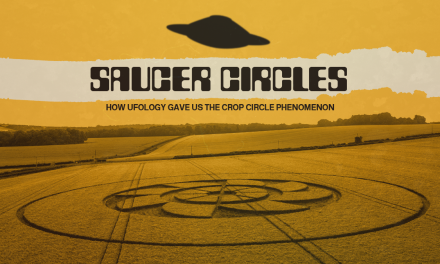 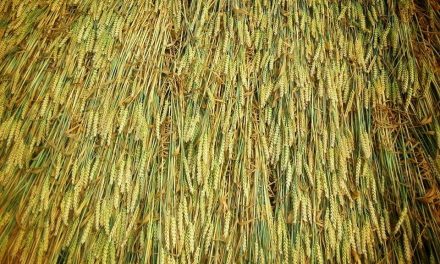 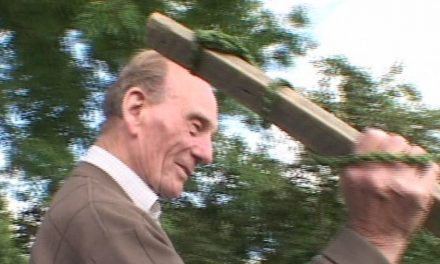