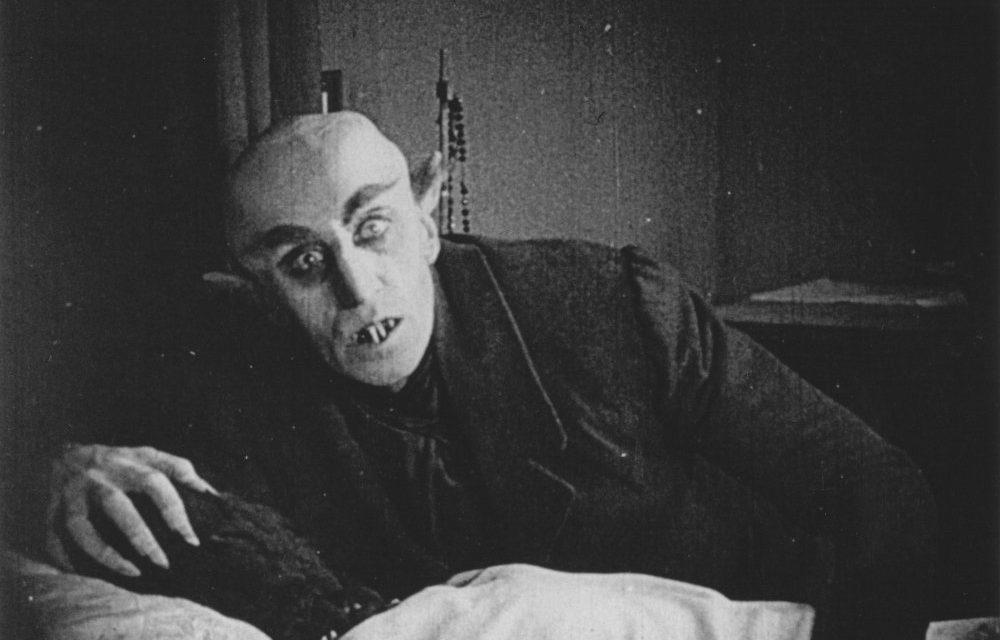 Top of the Croppies is usually a fun feature to write, but this month’s selection is less one of individuals who have made the crop circle world sit up than three people who really take the combine’s blades pretty low. Let’s begin with someone a little disturbing before moving onto those who think six wonky arcs represent ‘retrograde suns’.

The Circle Chasers Facebook group is a cesspit down there with anything you’ll find over on the Daily Mail and YouTube comments sections. Run by Mark Fussell of the Crop Circle Connector, it seems anything goes in this almost completely unmoderated hole. It’s hardly surprising that it’s a favourite haunt of a challenging individual called Peter King. Word has reached The Croppie from various sources that Mr King is a ‘cousin’ of low profile Canadian circles researcher. At least he claims to be.

Regular readers will remember this researcher was accused of being the extremely sharp online commentator Jack Jane at the end of 2019. The evidence was an IP number that traced back to a specific location in Toronto. It was the same place, ergo Jack Jane and the researcher must surely be the very same individual. Yeah, yeah. Very vague and, in The Croppie‘s eyes, far from convincing.

Nonetheless, Mr King has entered into the habit of attempting to defend the researcher’s name, honour and who knows what else by sending odd private messages to certain croppies. He’s even gone as far as contacting one croppie’s relative complete with images of their child and threats to continually hassle them unless they do this or that.

Sorry Peter, you’ll get nowhere like that except an assessment at the nearest psychiatric ward. If you’ve got a problem go about messaging the people directly involved rather than being so creepy and dragging others into things.

Those circle making legends aren’t having a great 2020. First there was the inconsistent angel, then — just days after they’d been calling out other circles as being ‘recycled’ — a waste disposal unit bearing an uncanny resemblance to a design on almost exactly the same spot from 2018. Then their junior member, Dan, claimed it had been trashed by ‘jealous rivals’. Of course they did, albeit just in his dreams. After that the cheeky so and so went out by himself, put down an entry level flower of life and began boasting about it like he’s a master geometer. Now though the mentor and his tutor have decided to quit the fields. 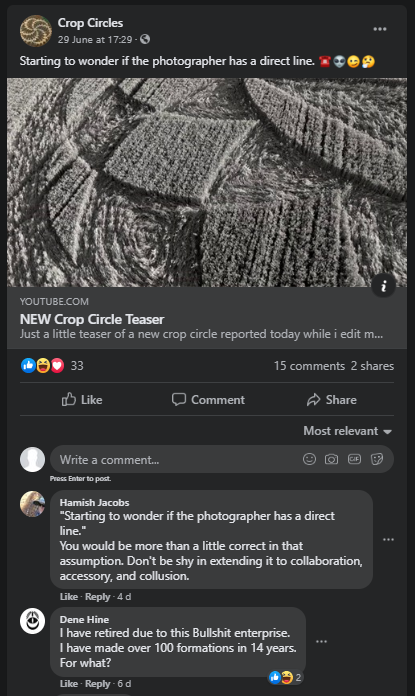 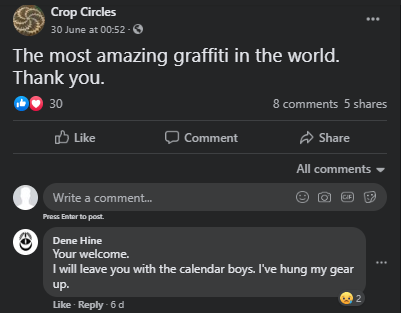 ‘I’ve retired from this bullshit enterprise. I have made over 100 formations in 14 years. For what?’ asked team leader Dene. ‘I will leave you with the calendar boys. I’ve hung my gear up.’

Mmmm. We’ve been here before. Nobody gave a damn then and nobody beyond #TeamDene gives a damn now. He’ll be back because he thinks everyone else is sat on a mythical money pot that really doesn’t exist. In the meantime, Dan is off to show his skills on the beach because nobody knows what he ‘is capable of’. Wonkiness?

As a parting shot, the Clandy boys left us with something of a rant, casting shade towards the Canadian researcher mentioned earlier on this page, and lashing out against anyone who came into sight. Funniest part was rookie Dan making out he knows what he’s on about in the field. Even The Croppie came in for some darkness. 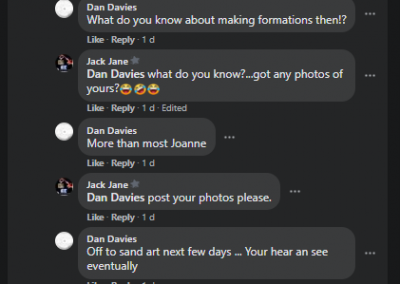 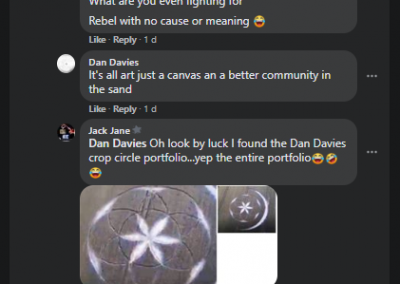 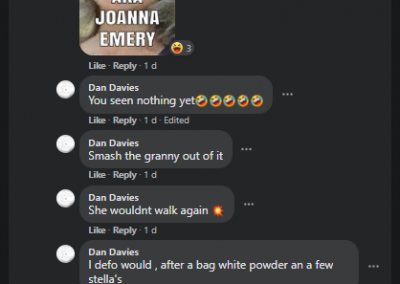 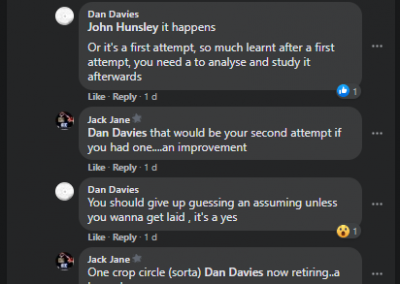 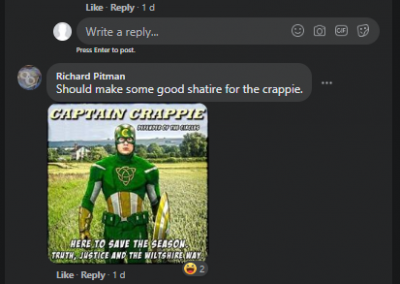 Alcohol or drugs had clearly got to Dan when he pre-emptively accused photographer Steve Alexander of stealing his circles designs and selling them. (Why would Steve, or his wife Karen, want to reconstruct a flower of life that can be whacked up in ten minutes by a seven year old?) Dan posted plenty of screenshots of legal detail on copyright infringement. Sorry squirt, you’ve got to have something worth stealing for it to get taken. Here’s some of the conversation: 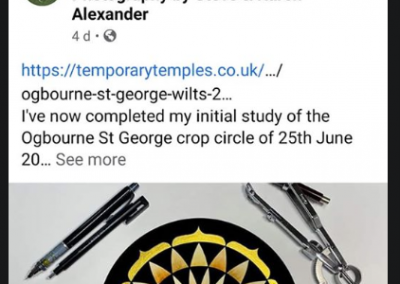 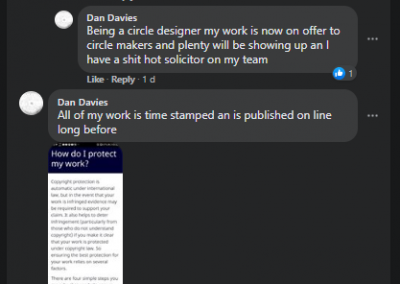 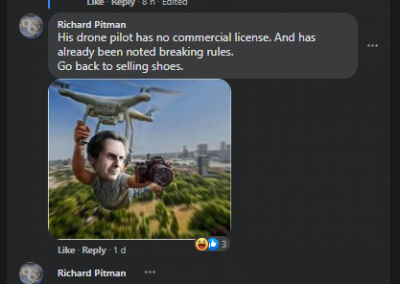 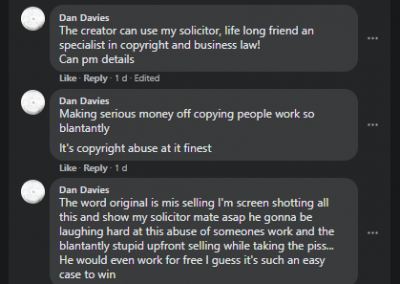 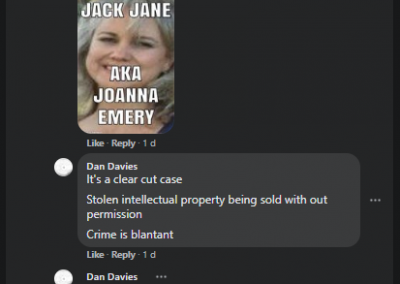 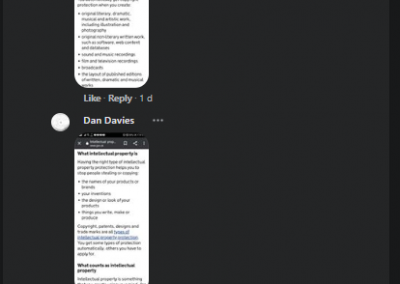 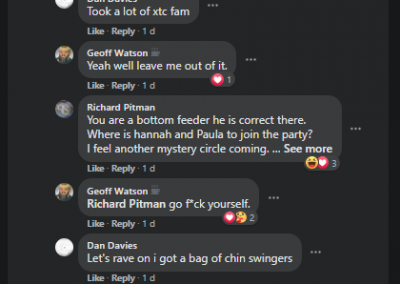 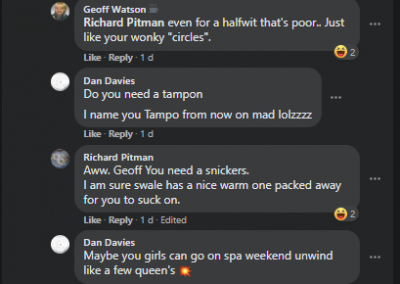 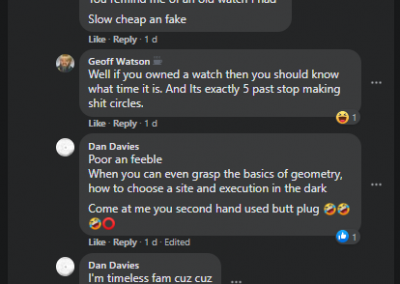 Reading this thread you really have to wonder whether Dan was high or completely deluded, though it’s a tough life out of supported accommodation. However, we’re clearly not ready for his brilliance. He didn’t last long in the fields, he’s clearly not going to last long on the beach. Best of luck to him with the latter though … genuinely.

Note the swipes at Jack Jane. And to think #TeamDene were claiming he’d been bullied into retirement. Expect more snarkiness from the sidelines and nappy wetting as the remainder of the season unfolds. 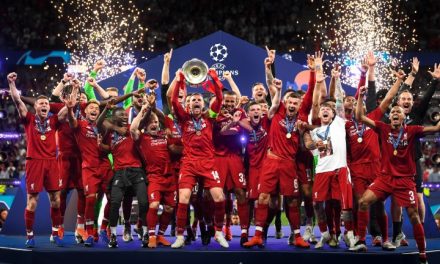 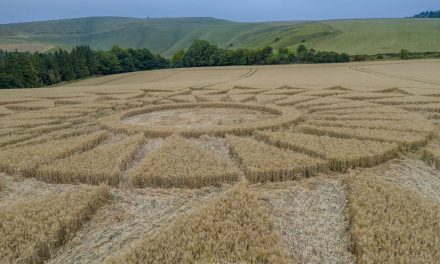